Yesterday, Turkey celebrated the 90th anniversary of its becoming a republic. A young republic, for an almost unimaginably ancient country. Mustafa Kemel, the Father of Modern Turkey, literally dragged the country into the 20th Century when he took power in 1923. Now revered for this, he is also known to have been ruthless. 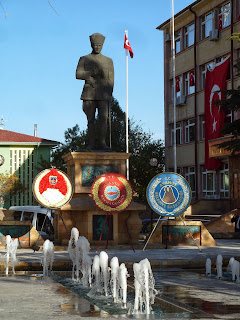 Turkish politics are sufficiently complicated to fill numerous volumes.  Suffice to say that, in spite of the present tug-of-war between Islamic, secular, and right-wing Nationalist factions, Turkey is now enjoying relative stability and economic prosperity. The intense fascist oppression following the last military coup in the early 1980’s has lifted considerably under successive democratic governments. It’s a long road (reference the protests & government reaction over the summer in Istanbul & other Turkish cities), but Turkey is striving to improve its global image in areas of human rights, freedom of speech, and justice.
Life in most of Turkey is slower than in much of the rest of the Western world. Turkish culture is a complicated mix of the ancient & the  modern, the religious & the secular. For me, it is the Turkish people’s strength of spirit that makes them so special. And so I am pleased to wish this nation a  Happy Birthday. 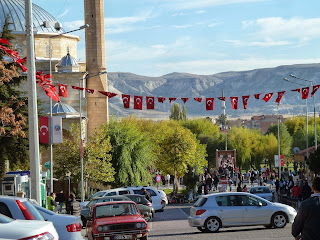 Email ThisBlogThis!Share to TwitterShare to FacebookShare to Pinterest
Labels: Turkey

Thanks for your visit.